Best rides and routes in the Algarve 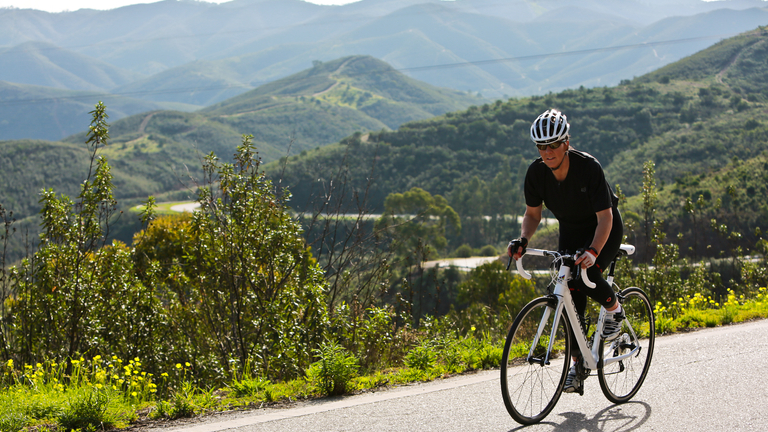 Cycling was a lifeline for me when I worked in the City. It was as much mental as physical – getting in the saddle was such a necessary release from the rest of the day’s business. Never mind the concrete scenery and homicidal delivery vans, while I was riding I could be anywhere I wanted…

I found I kept coming back to my favourite rides in Portugal. I’ve cycled a lot in Europe, but for me, the Algarve is as good as it gets. There are three Algarve routes in particular that I used to dream about – and now I’ve quit the rat race and run a cycle touring company, they’ve become part of my day job. There are worse ways of earning a living!

Portugal may not have the Alps, but it has plenty of iconic climbs – and the push to the summit of Foia, at 902m the highest mountain in the Algarve, is one of the very best. Geraint Thomas won this one for Team Sky when it featured in last year’s Pro Tour of the region.

I usually start from the little village of Amadena just off the N125. The ride begins gently as you wind up into the foothills of the Monchique range, passing occasional villages of narrow cobbled streets and pretty terraces. It’s a good surface, quiet, with plenty of freewheeling through rural farmland.

The first serious climb – category 4, although relatively short – comes after Bensafrim. The terrain rolls on, then the real climbing begins as you head for Romeiros: up to the lakes you go, then past enormous wind turbines into the mountain range proper.

It’s a rollercoaster road with several climbs and quick descents. The first real challenge comes with the haul up to the Marmelete road, averaging 7-8° but occasionally kicking into double figures. Coffee and cake at Marmelete? For sure.

From there you head east towards historic Monchique. It’s a fast winding road cutting through forests, and if you look south you get fabulous views all the way to Faro, Portimao and the coastline.

Monchique itself is beautiful, and it’s almost impossible not to stop at the central square. The restaurants and cafés are worth investigating to set yourself up for the final 9km up to the summit (the first 2km are the hardest, then it’s a steady drag…).

There’s a café on the top of Foia. It can get quite chilly up there, so it’s worth bringing a cape to enjoy more coffee and cake in comfort. The stunning views are quite something.

Heading home is quick and exhilarating, with some fine sweeping hairpins. You’ll reach 65mph in places.

The epic seven-mile stretch at the heart of this ride is an awesome thing, well worth a bit of international travel to experience…

Like many rides in the Algarve this one starts out from a pretty village of the N125 – Espiche, in this case, with the cobbles and whitewash so typical of the region. It’s a relaxing start as you head north along gently rolling roads towards Barao De Soa Joao, Bensafrim and Cortifo.

There are some Algarve route variants along the way, but they all take you through rural farmland, the Monchique mountains an imposing site in the distance. Some short sharp ups and downs (including a quick category 4) bring you through woods to the historic market town of Aljezur on the Atlantic coast, from where a great piece of road climbs up from the sea for about 10km.

At the top of the climb, you head east. Just before Marmelete you turn left towards Besteiro – and, finally, you enter Death Valley!

Your introduction is an incredibly steep mile of hairpins that drops you down 1,000 feet to the valley bottom. (Ben King climbed this same stretch in a frankly ludicrous 4.29 not long ago.) The narrow winding road cuts through densely-forested mountains, and a couple of bumps keep you focused on the job in hand. The temperature here can swing wildly from start to finish, so come prepared.

Ten kilometres take you to the far end of the valley, where there’s a steady mile-long climb back out. You’re headed for Monchique now, enjoying panoramic views of the valleys and rolling hills to the north.

Monchique used to be a Roman spa town, and it’s still popular with visitors. You’ll be ready for a well-earned lunch by the time you get there.

Heading home is, as usual, fast. You hang a left at the hilltop village of Cascais, then it’s sweeping hairpins and tight switchbacks to the bottom – they should take you well over 60mph if you’re up for it.

I’ve always enjoyed climbs with something worth getting to at the top – and the medieval sierra village of Alferce, with its majestic white-walled church and tower, is a delight to arrive at.

This classic Algarve route starts down by the sea at Portimao, loosening up with a few clicks of gentle climbing towards Silves before a turn northwards signals the beginning of the real ride. The next 15km or so roll through quiet farmland along a beautiful valley floor, with views on towards the Monchique mountains, crowned by Foia at the very top. It’s beautifully rural, but there are enough small cafés dotted about to satisfy those morning caffeine requirements.

When you reach the derelict church, it’s time to say a little prayer and get stuck into an awesome, epic climb. The road surface is good, but the 7-8° gradient (and occasional bump) is relentless. You’re soon out of the bucolic pleasures of the valley and surrounded by tall thin pines, with increasingly spectacular views back to the coast.

The hairpins and switchbacks get tighter, and the climb continues. There’s an optional 10km side-trip about halfway up, which takes you to the large dam and reservoir that provides much of the Algarve’s water – it’s a good spot for a break if you’ve made the extra effort.

Just when you think you’ve beaten the 15km climb, it gives you one last kick before you reach Alferce – but when you finally do arrive, it’s well worth it. It’s a lovely village, and the cafés, restaurants and views are all reasons to linger – and let’s be honest, you’ll need a rest by this point.

The last leg takes you along to the mountain town of Monchique, with new views north to the hills and valleys of Lisbon. From there, you have the choice of a few very quick descents ­back down to the coast – they include some fantastic sweeping hairpins which definitely have to be treated with due respect.

For me, the Alferce Algarve route is on a par with anything the Alps have to offer.